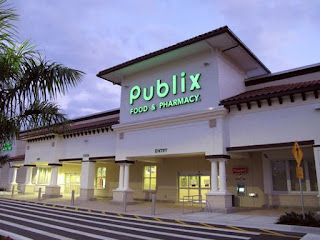 The long-awaited Publix supermarket in Golden Gate Estates is set to open at 7 a.m. March 23.

On average, it typically requires 40 semitrailers loaded with groceries to stock a new Publix store. That work began Wednesday as employees from other area Publix stores reported for duty to start the process, said Brian West, corporate spokesman for Publix Super Markets Inc.

“It typically takes us about three weeks to get the stores stocked,” West said. “It’s a lot of folks. There are a ton of people scrambling throughout the store. It’s a lot of busy work. They’re there with a mission.”

Once the shelves are fully stocked, the final food items to be put into place will be the produce on the afternoon before the store opens, West said.

Although the new store is about 46,000 square feet, it’s roughly 20,000 square feet smaller than the nearest Publix — the nearly 68,000-square-foot store that has operated since November 2001 in the Shoppes at Pebblebrooke at Immokalee Road and Collier Boulevard.

“That’s a big store,” West said of the Pebblebrooke location, noting that the grocer’s largest stores used to be built with a footprint of 65,000 square feet but now are topping out at about 56,000 square feet.


The Publix in the new Neighborhood Shoppes at Orangetree on the corner of Immokalee Road and Randall Boulevard is actually slightly larger than the company’s average 45,000-square-foot store now and employs 140 to 145.


“This store will have all the bells and whistles and look like our latest offering,” West said, noting that it will include a soup bar and some different offerings not available yet at most other stores. “Most customers are going to be hard-pressed to look for an item" the store doesn’t have.


The new store will open on a Thursday — the day of the week the Lakeland-based grocery chain usually launches stores in this region — after a brief ribbon-cutting, followed by a day of giveaways and product sampling opportunities, West said.

“We don’t typically do a lot of fanfare,” he said. “It’s really all about the customer. We want to celebrate with them. It’s their store.”


And the folks in Golden Gate Estates have been waiting for years for their store. Some still refuse to believe it is really opening until it actually opens.


A year ago the store announced plans to open last fall, but West cited a lack of water service for keeping the newly built store offline for another four months, resulting in a major loss of revenue anticipated during season. Orange Tree Utility Co. blamed Publix for not adhering to a utility checklist.

But that’s water over the dam. As of last Wednesday, the Collier County Water-Sewer District is the owner of the water and wastewater systems for Orangetree communities.

“It’s resolved at this point. We’ve been able to coordinate with the county and get the (water) pressure we need,” West said. “We are very, very, very excited to get this one open.”

In addition to Publix, the nearly 10-acre Neighborhood Shoppes at Orangetree will include a CVS pharmacy, a Publix Liquors store, a Chinese restaurant, a nail salon and another freestanding business that has yet to be finalized.


The liquor store next to the grocery store will not launch the same day as Publix, West said.

“We don’t have an opening date yet for the liquor store, but we will have one there,” he said.

The other businesses are still months away from opening. CVS plans to begin construction of its building on the 2-acre hard corner in the second half of the year for a store opening in 2018, said Mike DeAngelis, senior director of corporate communications for CVS Health.

The western end of the Publix strip will be anchored by a Chinese restaurant operated by Jack Lin, who also owns China King in the Publix-anchored Brooks Village shopping center at Pine Ridge Road and Collier Boulevard. Because Lin estimates it will take him four months to complete his new restaurant in Orangetree, July will be the earliest he’ll open China Palace, which is what he’s now planning to name it now.

Between Publix Liquors and China Palace, Diamond Nails salon also is expected to open this summer.

“It will take at least three months to get my shop ready to open,” said co-owner Vinny Le, whose family owns six other nail salons in Collier County.

To find homes for sale in the Golden Gate Estates area visit: http://www.napleshomesearcher.com

If you would like to visit our offices in the Estates please check out directions at: REMAX DISTINCTION | 8855 Immokalee Rd #11, Naples, FL 34120

Verify the value of your home,
maximize your investment and see local market activity.